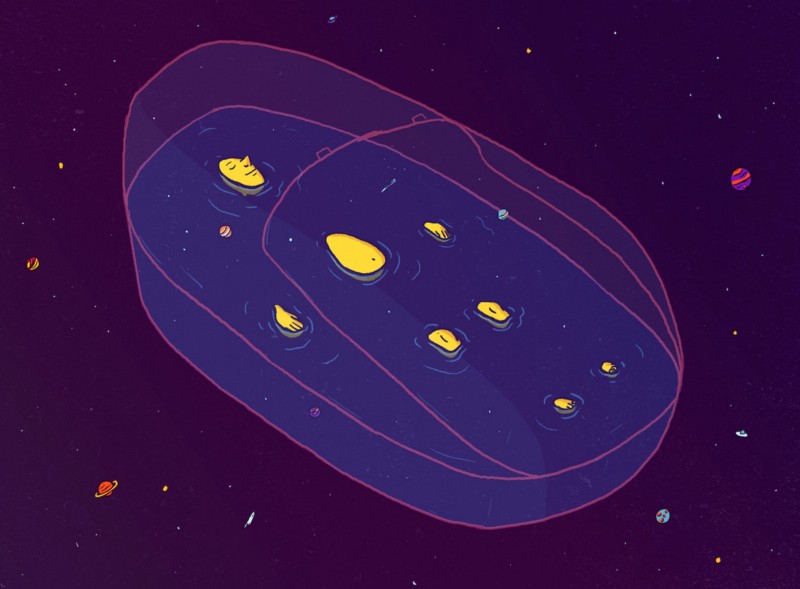 A few months ago, the hustle of the city started to make me anxious. Everyone I spoke to was a start-up founder. Everyone I spoke to spoke even faster than I do and seemed to be on their way to the next big thing. I was a bit lost and wanting to shift gears, and this wasn’t the first time I’d felt this way, so I started searching for a new solution to an old problem.

I first became curious about floating after reading an article that compared the experience to an acid trip. It sounded like a great way to get out of my own head for a while and find a reprieve from the chaos of modern-day life.

What I learned from a quick Google search intrigued me. Floating was developed in 1954 by John C. Lilly, a neuropsychiatrist who first experimented with sensory deprivation and LSD and later went on to be embroiled in an infamous dolphin sex scandal. Something about the potential to experience a psychedelic trip while fully sober intrigued me and made me a bit nervous. But my curiosity was stronger than my fear — I searched for float businesses and found Float Matrix, just a few blocks from my apartment.

When I first contacted them, the owner, Kane, and I spoke for over 30 minutes. He was informative, quirky and friendly, and told me that there would never be another day like the first, since on day 1 you have nothing to compare your experience to. Upon arrival, I was asked to shower and remove all the oils from my body. I was provided with all the amenities I would need, including towels, a robe, slippers and earplugs.

While showering, I imagined what it would feel to experience the “theta” brainwaves that are supposedly induced by floating. This is the half-awake, half-dreaming state of mind you experience just before falling asleep and right after waking up. Apparently, floaters experience a boost in creativity and stress reduction.

As I climbed into the float chamber (which looks a bit like an oversize coffin) I saw a few pebbles of salt on the rim of the tank. As I dipped my toes in and started to feel the warmth on my skin, my whole body started to soften. I let myself fall back into the water and closed the lid (which I was told would not be locked from the outside).

At first, I held onto the side of the tank. Once I felt safe and secure, I let go and surrendered fully. There was plenty of space. So much so that while I could touch the floor, I could not reach the top.

And so it began: my journey into nothingness.

It felt like I was flying through space. At one point, I grabbed onto the wall to make sure I was still in the tank. I could see nothing, and it felt incredible to have my eyes open so wide to absolute darkness. And then suddenly, so many stars appeared. I almost rubbed my eyes but remembered being told not to. (The water is very salty, and you don’t want to get it in your eyes.) So I let the stars sparkle and the darkness be. I observed the galaxies above, feeling the salt on my lips.

The silence was piercing — the nothingness, palpable. I let myself completely relax, and it felt so freeing to be naked and weightless. I lost all sense of time, and when I heard a knock on my tank to tell me that my hour was up, it felt like I’d been in there for only a few moments. This was the first time in my life when I’d truly experienced the relativity of time. It felt like I had just traveled to another dimension.

On day 2, Kane let me stay in for about 1.5 hours. I remember feeling at some point that the experience felt a bit longer, yet I still couldn’t quite grasp how much time was passing. I was having a conversation with my higher self and downloading all kinds of information. I kept hearing “water, water” over and over again. I also heard “car” and “money” a few times. Was this my mind making things up, or was I tapping into a message and/or clue about my future?

(Cut to two months later, when I was living in a little cabin on a remote beach in Costa Rica. On day 2 in the tank, there had been no conscious part of me that could have known that I’d end up living closer to the water than ever before. Also, one of the ways I paid for my season in Costa Rica was by renting my car on the rental site Getaround.)

And lest you think this floating thing is some hippie new-age fluff, you might heed the words of hardcore floater STEPH CURRY of the GOLDEN STATE WARRIORS (heard of him?). I had no idea those guys were into floating, but hearing them talk about it, I totally related to how I was feeling on my second day in the tank. In an interview with Tech Insider, Steph Curry said, “It’s refreshing to process what I thought about over an hour of floating, which are probably the most important things that are going on right now in your life. I have a very clear head when it’s done, and it shows in the days after floating. It gives me a nice boost of focus and perspective. The more I do it, the more I get from it.”

My first two days were so powerful, I decided to keep going back for more.

By the end of my week, I took an hour-long float. After sitting in the peaceful garden in the back of Float Matrix, I walked around the city for about two hours in a complete haze. Everything sounded extremely loud. Everything was moving insanely fast. At one point, I walked into Trader Joe’s and felt like everyone was running and yelling all around me. Was it them, or had I just slowed down? I could hear the sound of the carts scraping against the floor. Like a symphony unfolding all around me, unknown to itself. People walked toward me, carrying produce that appeared effervescent. I picked up an apple — it was fuzzy and soft in a way I had never experienced. I could feel every drip of sweetness on my tongue as it crawled gently down my throat. I was in awe of the simplest things, and I don’t remember the last time I felt as peaceful. Despite the world feeling like it was moving superfast, I was gently floating through it.

Prior to my float, Kane explained that an estimated 85% of our resources goes toward working with gravity, and another 5% goes toward our sight/sound/temperature control. This means that on an average day, we are using about 90% of our energy to simply be. So when we remove the gravity/sight/sound/temperature configuration, we have access to 90% of our natural energy. This is the gift of floating. This is why, after I ended my last float, I could feel everything so much more acutely: I had access to my natural energy.

So did I have my version of an acid trip? My time in the tank took me to a place without time, a place where all I needed to do was let go, lean back and release my neck — to sink into my deepest self and let the warm, salty water support me. Sometimes, as I’m walking through the chaotic streets of San Francisco, I still tap into the feeling that was birthed through this experience. Because once I discovered nothingness, a little bit of everything unfolded for me. For the first time in my life, I appreciated the power of the slowdown. I accepted the beauty of surrender. I found a little slice of peace in the chaos all around me.