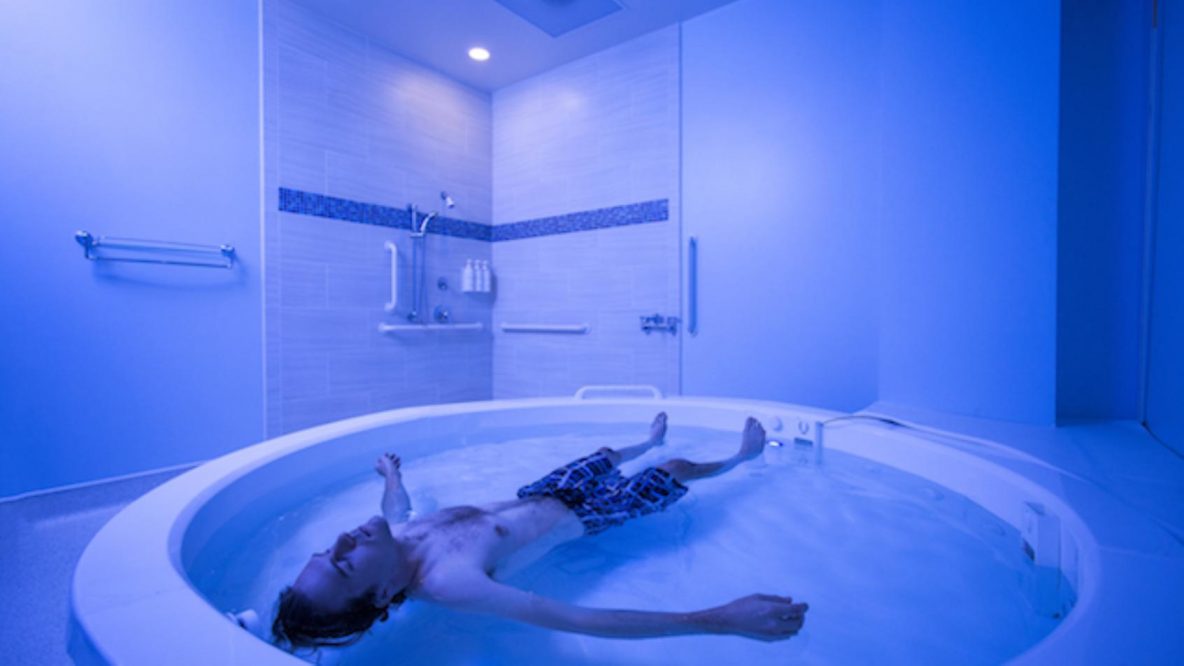 Sensory deprivation has been used for millennia by humans as a tool to sharpen the mind, prepare for a rite of passage, conduct rigorous meditation, and to reach Nirvana. Shaman, witch doctors, monks, mystics, Buddha, and even Jesus retreated to deserted mountain tops or remote caves to endure extended periods of isolation in an effort to reach enlightenment. Along those lines but available to us all without the days-long walk through a desert or blinding climb to a mountaintop: a float in a sensory deprivation tank.

The float tank, which is magnitudes better for actual sensory deprivation than any of the age-old approaches listed above, was created in 1953 by the late doctor of medicine and psychoanalyst John Lilly. It deprives its inhabitant of all environmental stimuli, freeing the mind to experience consciousness unencumbered by the waking world. In our 24/7 digitally connected society—a society that is experiencing skyrocketing rates of anxiety and depression—some psychologists are trying float tanks to help patients tap into their own inner universe by disconnecting from their digital one. With more research, float tanks have the potential to become an insurance-covered treatment for mental illness, potentially helping people leave antidepressants and anxiety medications in their past.

In 2016, Titus Nakagawa, a 35 year-old salesman from Honolulu, was one of the 6 percent of Americans with depression and also one of the 18 percent that in any given 12-month period are experiencing an anxiety disorder.

“I was on a four-year run of antidepressant and anxiety medications,” Nakagawa says. I started with 5mg of Brintellix; over the course of six to eight weeks I increased the dose to 20mg. At the same time, I’m taking 50mg of Klonipin three times a day as needed for anxiety. Then they added Wellbutrin—50mg, 100mg, 150mg, 200mg. Then I came off Klonipin and added Xanax, then I came off Wellbutrin and added Zoloft. [By then] I’m kinda just a shell, a zombie.”

The proportion of people like Nakagawa, especially young adults and teenagers, experiencing depression and anxiety is increasing at alarming rates. According to a November 2016 study published by the American Academy of Pediatrics, the prevalence of 12 to 20 year olds who experience a major depressive episode in one year has increased from 8.7 percent in 2005 to 11.3 percent in 2014. The evidence presented in an NIH funded 2012 Depression Review suggests modern humans may indeed be in the midst of a depression epidemic. Anxiety is the most common mental disorder; nearly 40 million Americans suffer from anxiety, yet only a third of them receive treatment. Justin Feinstein, a neuroscientist at the Laureate Institute for Brain Research in Tulsa, Oklahoma, is pioneering the use of the float tank as a novel non-prescription and non-invasive treatment for the mental issues dragging so many of us down.

“The current [anxiety and depression treatments] are not working well enough,” Feinstein says. “We are finding that more than half of the patients prescribed medications or psychotherapy are not getting much better. That’s millions and millions of people that are left in the lurch. It’s incumbent on us as medical professionals to do something about that need.”

The traditional float tank is an insulated metal, fiberglass, or canvas enclosure that is light-impenetrable and filled with ten inches of water heated to skin temperature. For those with severe claustrophobia or anxiety, the open float pool in a dark room is initially a more attractive option. The water contains 850lbs of Epsom Salt ,which increases its density to cause everybody, regardless of body type, to float without effort. Being the same temperature as skin, roughly 93.5°F, the water eventually becomes undetectable to the touch. With ear plugs and sound insulation, there is no sound. After an initial acclimation period, the inhabitant achieves near-complete sensory deprivation, and has nothing left to focus on but normally muted internal body rhythms and the pantheon of their own consciousness.

Neurobiologically, anxiety was built into human nature as a survival instinct, to remember not to head left of the lake because last week that’s where the lions ate uncle Bob. It’s hardwired and has existed far before our capability to solve puzzles. “Anxiety as a human phenomenon is really about thinking ahead, and trying to prepare, plan, and optimize your success. What anxiety is doing is priming the brain in a way that helps predict the future,” Feinstein says. “When it becomes problematic is when you start living future states in the present moment. When you are sitting in bed at night, and you should be just relaxing, but you can’t stop thinking about what you have to do the next day.”

Feinstein cites our ever-increasing obsession with technology and ephemera-driven apps like Snapchat and Instagram as one source of today’s anxiety epidemic, and refers to a 2014 study in which participants chose to shock themselves rather than be alone without a smart device. We live in a time where constant external stimulation and sensory input is so pervasive, when taken away, we are unable to sit alone with our thoughts, he asserts.

“Anxiety is often primed: Little cues in our environment, little reminders, will trigger a cascade of thoughts and eventually worries and physiological reactions,” Feinstein says. “What we don’t recognize is that every little ping from a text message or update is going to prime those same circuits. Having the phone constantly connected, and pinging away all day long, is going to keep these circuits active.”

Continual priming of the anxiety circuit is what most of us experience on a daily basis, and is the antithesis of sensory deprivation. It’s exactly where Nakagawa found himself, overloaded from a high-pressure sales job, having to answer several emails and texts while simultaneously being on the phone all day. Compounded by his anxiety and depression, he reached a breaking point and had to quit.

“I was topped out. I was on unemployment at that time, riding the system,” he says (adding as an aside that he has paid into the system all his life as a taxpayer). Looking for alternatives, Nakagawa heard about float tanks—and their supposed effects on anxiety and depression—on a podcast.

He found his way to Dream Float Hawaii, founded in 2014 by Geoff Sato, an eastern medicine practitioner and longstanding devotee of meditation and consciousness awareness practices. Sato describes the psychological benefits of the float tank as a mental “reshuffling.” “The float tank creates the ideal environment…Everything is reshuffled when you don’t have these things you’re so used to relying on; your spacial awareness, your proprioception, your muscular tension, sights, sound, touch.”

Dream Float Hawaii also partners with Eric Jul, a clinical psychologist who routinely interviews his patients directly after a float session, and credits an “unfolding” process during the float session for its success: “As they quiet down some of the external stimuli in life, the patient unfolds and taps into their own inner universe,” he says. “My patients come out very relaxed, which as a psychotherapist is incredibly helpful because there is an openness to not only the therapeutic process, but also an openness to themselves. It helps them treat themselves a bit nicer with more compassion and understanding.”

It didn’t take long for Nakagawa to notice how his weekly float tank sessions helped. While Sato and Jul described the process as reshufflingand unfolding, Nakagawa, true to his generation of Windows 95 users, describes it as “defragging .”

“I came out [of the float tank] and instantly, 100 percent, it helped,” he says. “When stimuli are removed, there is nothing but your brain and thoughts; you have to look at yourself, think about the things you don’t want to think about. After I do, it feels way better. It feels like a therapy session with yourself.”

Floating does have a learning curve. The majority of the first hour and a half session is spent acclimating to the environment. It takes some trial and error to find the optimal position of the neck and arms in a gravity-devoid world. By the third session most new floaters are able to obtain at least a glimpse of what happens when environmental stimuli are removed and the mind is the only input left.

Within six months of starting weekly float sessions, and under the guidance of his psychiatrist, Nakagawa was able to wean himself off all of his prescription medications. He’s remained medication-free for ten months.

The benefits he experienced are no surprise to Feinstein, who describes floating as “resetting” the mind. Last year, Feinstein placed healthy subjects into an MRI scanner to obtain their baseline picture, and then had them undergo three float sessions in several weeks. After the three sessions, participants had decreased levels of anxiety and increased levels of serenity compared to their counterparts, who sat in a comfy chair in a quiet and dark room for an hour and a half. Feinstein intends to publish the data later this year.

Feinstein’s float subjects showed a decrease in connectivity of their salience network, or the network of neurons that is responsible for deciphering which information in our environment and everyday lives is important to us. A similar change on MRI scans is seen after taking an intravenous form of the typical benzodiazepine anti-anxiety medications like Xanax, Valium, or Ativan. Furthermore, the degree of salience network connectivity change correlated with the degree of anxiety drop post-float. “We are hitting the same brain regions that anti-anxiety drugs are modulating,” Feinstein says.

It sounds too good to be true: Can the simple of act of tuning out everyday noise in a float tank really treat modern medicine’s most ubiquitous mental illness? A small pilot study conducted by a group of Swiss researchers in 2014 showed that when healthy volunteers participated in 12 float sessions over seven weeks, stress, depression, and anxiety were significantly decreased. However, in terms of neuroscience research, there is not much else as concrete as Feinstein’s MRI studies. The real test will be how well this will translate to not just a healthy population, but one that suffers from mental illness.

“Can we take this chronically anxious brain, and put it into a state of calm?” Feinstein wonders.
He is currently in the midst of floating patients with anxiety disorders. “So far we are finding some very promising preliminary results with this population, and we are looking forward to extending this into proper randomized controlled trials. Western medicine is never going to fully embrace floating until we have data to prove that it is doing something beyond the placebo effect.”

Feinstein hopes his results will catch the eye of his colleagues and lead to more research, as currently there is only one other research group in Sweden actively investigating float tanks in mental illness. “I’ve been contacted by several health insurance agencies who have become very interested in whether floating can help with these issues. They are very interested in natural ways to alleviate these conditions,” Feinstein says. “This could actually become one of the things that is prescribed, and be relatively cheap compared to the current procedures and medications.”

The jury is still out on whether float tanks can conclusively treat mental illness, and stopping or changing medication should never be attempted without the guidance of a mental health professional. However, it’s hard to ignore the diverse array of promising descriptions used by doctors and floaters alike: Whether it be reshuffling, unfolding, or resetting— and according to Nakagawa, defragging — let us hope float tanks fulfill this lofty promise.

Darragh O’Carroll, MD, is an emergency physician in Hawaii.